On pedantry, ambiguity[,] and the Oxford comma. 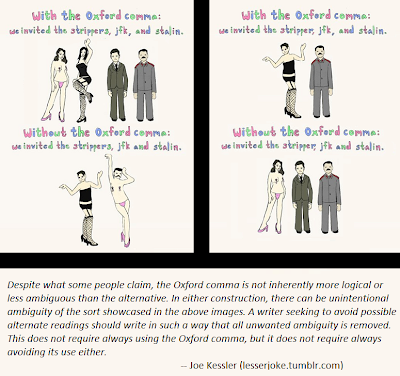 Hello to all my language hippies out there! I thought I would share an infographic I made earlier today, based upon an image I keep seeing people pass around online (roughly the top left of this version). The original purports to show that the Oxford comma, which is the use of a comma before the word 'and' in a list of three or more items, removes ambiguity from writing. My own version is meant to show that there are other sentences where it is the lack of an Oxford comma which would prevent ambiguity from arising instead.

My opinion is that you should use whichever style you prefer in your own writing, but also that you shouldn't judge other people for using a different one in theirs. But if you're going to get into an argument with someone over the relative merits of the Oxford comma or its absence, make sure you have the facts on your side: neither style is inherently less confusing or more straightforward than the other. It's all just just a matter of personal preference, or what the writer thinks will be most effective in a given sentence.
Posted by Joe Kessler at 11:48 AM

Language Hippie is a voice for increased tolerance and celebration of linguistic diversity. This blog marks an objection to the widespread notion that nonconventional spelling, grammar, and word choice are incorrect or shame-worthy. Here instead, those differences are embraced.

Joe Kessler
I am a linguistics graduate student with an open mind and a lifelong appreciation of language. You can reach me at http://www.acsu.buffalo.edu/~jtkessle/, or on Twitter at @kessling.